At long last, another unit of my Baronial Rebel Army is painted. This time I've complete a 30 man spear armed unit under the command of John Fitzjohn.

John Fitzjohn
John followed his father John Fitzgeoffrey into rebellion, who was a former Justiciar of Ireland and a leading magnate. Fitzgeoffrey opposed the King in 1258 after a loss of influence in Prince Edward 'court' and position in the face of rough justice (or no justice) when attacked over his disputed Shere manor (Surrey) by the royal relative and favorite Aymer de Valence. Again, these foreign relatives of the royal family placed another family, this time the Johns in opposition to the royal regime. As a leading magnate, Fitzgeoffrey was a leading rebel so his 'sudden' and untimely death placed his son and heir Fitzjohn as a leading partner with de Montfort. 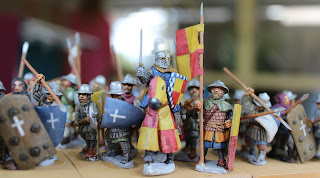 He had married Margery de Basset making him the son-in-law of Phillip de Basset, the Justiciar of England and his opponent in the war. Yet another unfortunate familial divide in a very personal conflict. 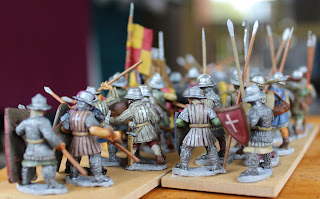 Born around 1240, Fitzjohn must have been 24 at Lewes so very much in his fighting prime with a chief command at the Battle of Lewes. Surviving the battle, he reduced Ricard's Castle (the Chief Seat of Hugh de Mortimer), and took the Castle of Ludlow (Shropshire) for de Montfort. William Blaauw (The Baron's War, London, 1844) has it that Fitzjohn was zealous and fierce in his prosecution of the rebel cause and his loyalty to it. He was installed as the baronial Sheriff of Westmorland, and 'keeper of the Castles in those parts'. He was also made governor of Windsor Castle. 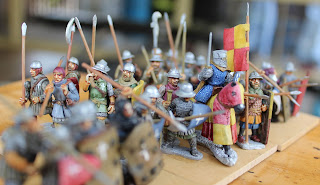 Surviving the battle of Evesham, he was nevertheless taken prisoner and lost it all. Again, according to Blaauw, Fitzjohn 'wilfuly forbore to make his peace or compound for his estates' and thus the inheritance of his lands appears to have been given over to de Clare, Earl of Gloucester.  Later, through the Dictum of Kenilworth he does seem to have been afforded a further opportunity to do so. Fitzjohn's misfortunes after the demise of the baronial cause were short lived; however, as he died in 1265 of unknown causes and with no issue. 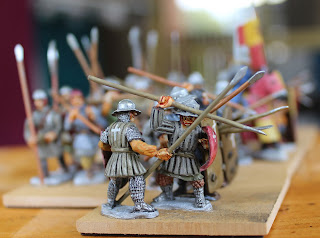 The Unit
I selected a colour range for the shields taken from the basic field colours of the leading barons I am representing in the Centre ward - red, blue and yellow. Others are natural timber and all are painted with their baronial white crosses. This will be the second last unit of foot I need for the army. 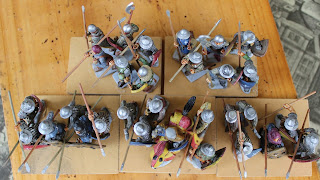 There are several Mirliton figures who carry their long spears over their shoulders in marching pose which I love but were problematic to base. So one stand of six appear to be moving across the rear to take up position and extend the right flank when their stand is positioned length-wise. Alternatively they can be positioned breadth-wise and appear to be taking up position from the rear. I actually don't mind how this has turned out. 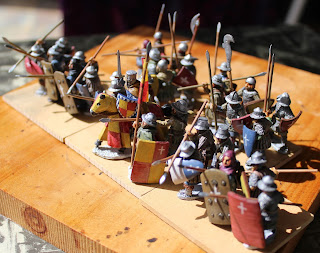 This is my first banner of cloth for this army and you can make out the weave in some of the shots.The next unit will be the Centre Ward archers (12) which are already primed and ready to go with a new experiment for me in painting faces about to be embarked upon.
Posted by Unlucky General at 10:29 PM

These look great, I am enjoying watching this army come together.

Thanks gents. Looking at my oldest posts I've been chipping away at this since 2008. No one can accuse me of rushing anything.