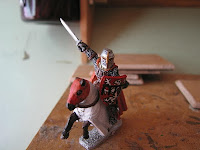 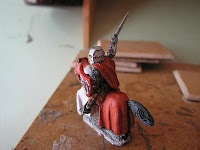 Born in 1244, Guy de Montfort was the youngest son of Simon de Montfort, Earl of Leicester, leader of the baronial army at Lewes. Commanding men within the right ward of the army, Guy was 20 years of age at Lewes and I have difficulty imagining the terror, fear, anxiety, thrill and exhilaration which this warrior youth must have felt throughout that eventful day. A proud day for his father, Guy fought with his two brothers, storming to victory against the odds. This family affair extended to the opposition also, as the opposing general was Guy's own uncle, King Henry III - his mother's brother. Another uncle also commanded against them: Richard of Cornwall, together with his son, Henry of Almain who Guy must have viewed as a deceiver, Henry only having recently deserted the rebels to go over to the King, betraying Guy and his father's cause. Prince Edward (another cousin and future King) also fought against them. These perspectives are important to consider as this battle was a personal matter for the Royal family of which Guy and the de Montforts were a part.
From the dizzying euphoria of victory followed a desperate struggle for survival. Within the year the de Montfort cause was overthrown in the most dramatic manner.  The Royalist forces made a Herculean comeback, engaging in an energetic campaign culminating in the final clash of arms on the field at Evesham. The chronicler Matthew of Westminister records Guy as fighting and being amongst the wounded who were taken prisoner at the end in Evesham in 1265. He was thus present at the fall of the Barons' cause where their leader, his father, was killed and mutilated. Killed that day also was his eldest brother Henry de Montfort with a list of other barons. One cannot begin to appreciate what must have gone through the youth's mind at such a time. Again, we must remind ourselves that his enemies, the men who perpetrated the indecent dismemberment of his own father (perhaps in his sight) were his own kin. This was not the end of either Guy or the de Montfort family; however, nor was it the end of their story. Held at Windsor castle until 1266, Guy bribed his guards and escaped, fleeing to France where he reunited with his brother Simon and went in search of adventure and fortune.

Charles of Anjou had a long standing association with the de Montfort family, and not just the branch of which Simon Earl of Leicester was a part. Phillip de Montfort had been a confederate of Charles and an active prosecutor of his interests in his campaigns in Italy, in which Charles was to secure the kingdoms of Naples and Sicily. With Philip in 1268 appears his cousin Guy de Montfort (now 24), both fighting and securing victory against Henry of Castile's forces on 23 August at the battle of Alba (Taggliacozzo). Guy was in the forefront of that battle securing fame for his valour and the Kingdom of Sicily for his new lord, Charles of Anjou. Succeeding upon Phillip's death was his son, John de Montfort who settled in the new Italian kingdoms, becoming Chancellor from 1273 and a best friend to Guy, placing Guy in a place of political influence.

F.M Powicke (Ways of Medieval Life and Thought - available on-line through Google books) supposes that Simon de Montfort (the younger) joined with his brother Guy by 1268 in time for the division of forfeited lands in the new Angevin Italian kingdom.  Guy secured the fiefs of Arienzo, Nola, Castel Cicala, Monteforte, Forino and Atripalda. Guy was also entrusted with enforcement of Charles's rule against Imperial forces in Siena and central Italy. He was appointed Vicar-General of Tuscany on 24 March 1270 and Charles's personal Vicar in Sicily.  It took Guy 12 months to subdue Siena. Guy is described by Powicke as competent and attractive, "more pliable and less scrupulous than his father", "not too proud to take a bribe" and exercising political acumen in turning local feuds to his financial advantage - he sold off the fate of Poggibonsi to the vengeance of the Florentines for 4000 gold florins. Six days following the fall of Siena, Guy married Margherita Aldobrandesca, the young heiress (16 or 17 years) to Ildebrandino of Pitigliano (Rosso the Red Count) who owned vast, wealthy and (as it proved later) easily defensible estates throughout central Italy.

It was then that Guy proved responsible for one of the most notorious crimes in medieval Europe. Guy exacted a terrible revenge, together with his brother Simon, upon their cousin Henry of Almain, son to Richard of Cornwall and thus cousin to the new King Edward I. On 13 March 1271, Henry of Almain was hearing mass at the parish church of St. Silvestro in Viterbo. The contemporary chronicler Guido de Corvaria was present in Viterbo with Herny of Almain and others of his company who were returning from crusade. It is also possible that Henry was detached from the man crusading force on a mission of peace for his cousin and King, Edward I. Guido de Corvaria records how Guy, with his brother Simon, entered the church and how Guy slew Henry with his sword. No doubt harking back to the bitter betrayal and gruesome killing of Guy's father Simon, some accounts have the body of Henry being dragged out into the piazza and mutilated. Guy, Simon and Guy's father-in-law then fled into Rosso's lands where Guy moved about from castle to castle for the next two years until captured and imprisoned from 1273-4. Shortly after their flight during their period of refuge, Simon died. Guy was excommunicated for his crimes in 1273 by Pope Gregory X and had his lands confiscated by Charles. Guy's ill-renown was immortalised in Dante's Inferno Canto XII where he dwells alongside other infamous personages in the river of blood for all eternity - Dante was a child at the time of the murder.

By 1281 Guy, now 37, recovered his position in Charles' court and commanded the Papal forces at Romagna in 1283 defeating Guido de Montefeltro and inherited his father-in-law's estates upon Rosso's death in 1284. In 1285 he fought beside Corso Donati and his last action in June 1287, losing a naval battle against Roger Loria in an attempt to retake and supress the rebel Sicilians, following the demise of Charles of Anjou and the resurgence of the Aragonese over the interests of Angevines. Guy consequently spent the last of his years in a Sicilian prison where Powicke cites his death in 1291 at 47 years (although his death is often recorded as 1288) . Guy was survived by his daughters Anastasia de Montfort Contess di Nicola (heir to his restored estates) and Thomasina (Thomasse) de Montfort. 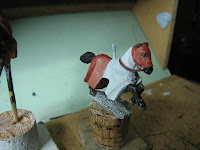 Modelling: Normally I construct my complete cavalry models prior to undercoating and painting. In the case of this model and for some future knights I am compelled to paint mount and rider separately in order to get the detail on the rider's surcoat which the horses neck would otherwise prohibit. In all cases I drill the seat of the rider and back of the horse and then fix a pin cut from 1.25mm steel wire with Selleys Araldite. Once set, the rider is then glued with the same glue making the strongest of bonds prior to mounting on my cork painting stands. For painting seperate riders, I mount them on a cocktail stick (toothpick). As you can see from these photographs the steel pin still aids fixing the rider to his mount which required cutting back and careful filing to ensure a clean, metal-on-metal contact with the Araldite. Also, in this case, the detailing of Guy's cloak was aided with the ease of handling the rider separately. The figure is one from the Gripping Beast range. 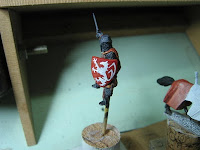 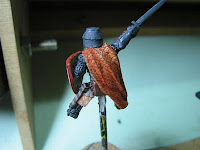 Posted by Unlucky General at 12:15 AM

simply supurb work Greg, the cape looks excellent! And what a character he was, I was never aware of his adventures in Italy, thanks, a great read.

Guy de Montfort is going to be the hero of a new novel by the writer who published a 4 volumes novel on his father!