William de Goldingham was a knight of Essex (holding Chigwell Manor and seisin (freehold) of Burebache Wood) and may have come into the possession of family estates at Goldingham Hall (a manor in Bulmer parish, Yorkshire) and Ryshton, Yorkshire which was held earlier by Hugh de Goldingham. Nevertheless, the chief estate for the Goldinghams was Chigwell, formerly of William Brito and believed to have come into their possession as tenancy in demesne (or ownership) some time after 1254. The manor of Grange, which gave its name to Grange Hill, was originally part of Chigwell Hall and altogether the estates must have comprised significant land holdings and income as William de Goldingham and Aline (his wife) confirmed to Robert, Abbot of Tilty, gifts to the abbey of 3 messuages (house and land) and 234½ acres of land in Chigwell in 1258. Having said that, he is generally judged a knight of average means.


The Goldingham family lineage through open sources is sketchy but we know that William de Goldingham was born in Chigwell in 1236 and that he married at age 21 to the 16 year old Alina (or Aline) le Breton on Jul 1257 at Chigwell. Alina was of Essex also, born 1241 in Layer Breton and is recorded as being the daughter of William Brito. Given the timing it may well be supposed that the demesne of Chigwell came as dowry. In any event, four years on and the young couple had a son, John de Goldinham who went on to inherit – dying himself in 1315.

A good number of Essex knights and their followers took up arms with the Montfortian rebel barons, William de Goldingham amongst them. Whether he was at Lewes or not I cannot say for certain. It appears that he survived the war but was not pardoned ‘of his trespasses’ until 28 June 1267. This timing strongly suggests that William was with the ‘Disinherited’ and amongst the garrison at the Isle of Ely which capitulated 1 June 1267. Had he previously given over to the King, I suggest he would have been captured within the ‘Dictum of Kenilworth’ when that siege had ended in December 1266. Given that previous to the outbreak of open hostilities, the record indicates stability or even accumulation of property within the Goldingham estates, his subsequent rebellion is the most likely cause for any subsequent forfeit to the crown; the most probable reason for falling in with the last, desperate revolt with the ‘Disinherited’.

So, when would a knight like Goldingham have been most likely to join with the rebellion? Given that we know that the period following Simon de Montfort’s victory as Lewes in fact saw a decline in support rather than the increase one might otherwise have expected, it seems just as likely therefore, that William was with the army from before Lewes. Furthermore, even if present at the fall of Northampton, he would have been just as likely to have broken his parole with the others and took the field at Lewes. Given the events at Evesham and the fact that Goldingham’s recorded activity would seem to post date that battle, I can be less bold in placing him there with confidence.
﻿
So, if you agree with my interpretation of the evidence at hand, we have William de Goldingham at Lewes at the age of 28. Other than the record of his ongoing rebellion and pardon by 1267, the only record known to me is that of his death in 1296, aged 60. Thanks to the quirk of time and fate; however, this otherwise ‘humble’ rebel remains known to countless church goers,or at least seen by them. William de Goldingham’s effigy in purpeck marble survives to this day in All Saints Church, Rushton in Northamptonshire. 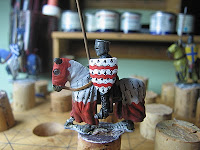 Modelling: My William de Goldingham is with the knights of my cavalry for the Left Ward and is an old Essex Miniatures model (ironically) with a Gripping Beast shield. Those of you familiar with this figure may recall it comes with an integral triangular shield (an under sized one in my view) which I had to cut away. Once more I opted for a non-heraldic surcoat and in this case, a rather plain black one befitting his modest social status. His horses caparison; however, was another matter and I have come up with a speculative design based upon his arms. The image here is the unfinished model (for the finished item see the future posting on the Knights of the Left Ward: Modelling). It was taken just prior to the matt spray coat I give all my models before finishing off with the shiny metal details – Humbrol Aluminium for the maille and steel, with a dry brush of silver to highlight.

W. A. Copinger: Manors of Suffolk

Posted by Unlucky General at 10:54 PM

Another supurb job mate, the paint job is excellent also. From memory he may of had a article in military modelling...I will have a dig around.

Hello, is anyone still here? My husband is a direct descendent of William de Goldingham, Master Templar of Gislingham d.1296. We have the complete family history if you are interested.
Sara Goldingham

Hello Sarah. Yes, I'm still here even if my activity on this blog has been non-existent lately. I am curious to learn if you think I'm right about placing your husband's ancestor at Lewes. Thanks for reading.

Hello Sarah. Yes, I'm still here even if my activity on this blog has been non-existent lately. I am curious to learn if you think I'm right about placing your husband's ancestor at Lewes. Thanks for reading.