Quarterly gules and or, a mullet argent. Heraldic interpretation: gules denotes Military Fortitude and Magnanimity; or (gold but represented yellow) represents Generaosity and Elevation of the Mind; quartering is taken as recognition of the crown to brilliant military service and its fields (in this instance) representing the significantly even colours  – though perhaps with greater emphasis on gules having occupied the first quadrant. Charging the first quadrant, the mullet (depicted as a five pointed star) in argent (silver, depicted white) represents Peace and Sincerity (colour), the mullet representing a fallen star denoting divine bestowal of virtue. 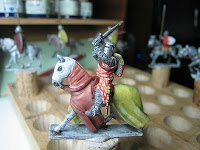 My completed but unbased model representation of Robert de Vere, Earl of Oxford and commander of the Left Ward of the Rebel army at Lewes. I fiddled about with this model and tried to pay more attention to the scabbard and surcoat. I'm not convinced the photos have highlighted the detail of the garment. 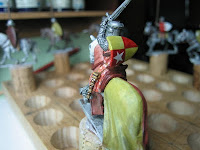 This is a Mirliton Miniatures figure and certainly one I felt was dramatically sculpted enough to make an impact for one of my Rebel commanders.I elected to position a shield on his back and made the strap with green stuff. 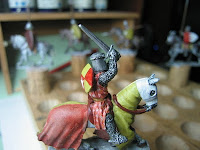 The Mirliton figures require some assembly (upper torso and head being seperate) and I have position the assembly to affect my earl wielding his sword, preparatory to delivering the 'death blow'. I have shifted from basic representation of heraldry on the surcoat this time (as with others) with the question in the back of my mind, 'how much representation does it really need'? 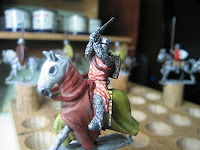 I have followed some practices seen in the sources for caparison designs and opted this time to avoid repetion of the blazon. Robert will be mounted on a base with a sergeant (two figures) on a bouble bubble base (distorted figure 8) to represent my ward commanders. My army commander de Montfort will be with two others on his base.
﻿
Bn c.1240 in Hedingham (presumably at Hedingham castle, Essex) Robert de Vere, was the youngest of four children and the only surviving son of Hugh de Vere, 4th Earl of Oxford who died 23 December 1263 making Robert the 5th Earl of Oxford at 23 years. Whilst earls of Oxford, the de Vere family were amongst the victors with William I in his conquest of England and their original estates and on-going centre of power resided in Essex.﻿
﻿
On 22 February 1252, Robert married Alice de Sanford (Saunford or Sanford);born c.1231 and nine years his senior. The marriage to Alice brought the hereditary office of Chamberlain to the Queen into the family. He had fathered his son and heir, Robert in 24 June 1257, his first daughter Mary in 1262 and his second, Joan in 1264 so presumably he went to war leaving Alice at home either heavily pregnant or with babe in arms, his six year old heir and a toddler in the household. Should he have been killed or the battle lost, one can only guess at the fortunes and future of the de Veres.  ﻿

﻿He was a political Montfortian from the beginning, taking up arms when open rebellion broke out. He was knighted prior to the battle of Lewes by Simon de Montfort, led the Left Ward and survived the battle to be summonsed to de Montfort’s parliament the following year (1265). He joined with Simon de Montfort ‘the younger’ in plundering Winchester that year but missed the battle at Evesham as he and Hugh de Montfort were surprised outside Kenilworth castle by Prince Edward and his army, being arrested on 1 August with no hope of joining with their baronial chief.


For his sins, the King granted Robert’s earldom of Oxford to Roger de Mortimer but like others, Robert came to terms under the Dictum of Kenilworth. He recovered his lands and title through payment of appropriate fines, further payments to Mortimer and a marital alliance of his eldest son to Margaret de Mortimer (Roger’s daughter).


Earl Robert went on to serve the crown faithfully under kings Henry and Edward. He was present at Council, served against the Welsh in 1277, 1282, and 1283 and attended the parliaments of 1283, 1295, and 1296. Robert was chosen to jointly preside over the considerations of Scottish succession at Berwick in 1292.

He experienced the death of his eldest, Joan on 21 November 1293. He died in 1296 (aged 56), survived by his wife Alice (died 7 September 1317), his sons Robert (succeeding as 6th Earl of Oxford), Alfonso (born 1266) and daughter Mary (born 1262). The location of a de Vere manor house, both Robert and Alice are buried at Earls Colne, Essex – the town named after the river it stands by and the earls of Oxford. They were interred at Colne Priory, bequeathed previously by the family to the Benedictine order, the chapel for which was part of the priory, still standing today, St Andrews.

Thanks to Genuki (UK and Ireland Geneology) website for the map of England inset.

Posted by Unlucky General at 1:53 AM

An exceptional post Greg, keep up the great work.

That surcoat is neat.