Geoffrey de Lucy of Newington (son of the fifth Geoffrey de Lucy and Nichole de Lucy) was born 1237, presumably in Newington, Surrey (subsumed in the greater metropolitan London). The older Geoffrey appears to have died by 1252 but I have no record of our Geoffrey’s wardship which he may have had sold off as he was only aged 15 at the time. 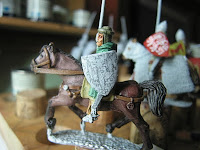 He married Ellen de Raveningham of Dallington and Slapton (born 1241) some time before May 1257 with whom he fathered a son Geoffrey, born August 1267 in Chelmscot, Buckinghamshire.
﻿

I can find little about this man and his involvement in the Montfortian rebellion beyond the essentials. Nothing specific indicates his particular politics other than the chroniclers placing him at Lewes with the Londoners. Geoffrey’s sister Maud de Lucy (born 1139 in Newington) married Nicholas de Segrave who you may recall commanded the Londoners of the rebel Left Ward. Other than this clear personal allegiance, his proximity to London (holding Newington) would place him at the centre of the movement and ‘of’ the rebel camp. 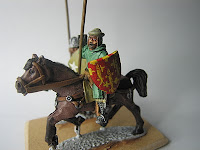 Present at Lewes (aged 27) Geoffrey is one of the knights specifically recorded as having broken before Prince Edward’s cavalry and being amongst those who routed with the Londoners at Lewes. Geoffrey nevertheless survived the battle but any further involvement in the rebellion is not known. 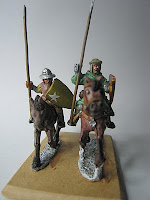 Modelling: Opting for an un-caprisoned mount, and presumably having lost his helm, my Geoffrey de Lucy wears a green cloth surcoat 'gifted' to him, green being regarded as a noble colour in terms of 12th century 'livery'. I have him based with a sergeant, not as a command base (mine always being rounded) but because he is one of a company comprising my cavalry for the rebel Left Ward in which I have included squires and sergeants. I had contemplated printing off the blazon and gluing it on due to it's complexity but in the end, just sketched and painted it as usual. The model is a Gripping Beast knight but I cannot recall if the horse is. His mount is considerably larger than some others within the range, so I suspect not. His accompanying sergeant is a Wargames Foundry figure (horse and rider) whose shield is my version of a retainer to the earl of Oxford, Robert de Vere.

Posted by Unlucky General at 1:47 PM

Greg a lovely job on his sheild, I thibk he deserves a comparrisoned horse just so i can see another round of fine fish!