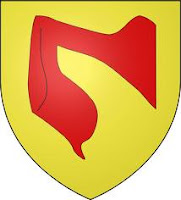 Heraldry: Or, a maunch gules (a maunch being representative of the sleeve of a lady's robe.

Henry de Hastings, son of Henry de Hastings (6th Baron Hastings by tenure and first by writ) was born c.1235 at Ashill (originally Asleigh), Norfolk. The estate included: the manors of Whitefield, Stratton and Cundover (Salop); of Wigginton and Wulverhampton in Staffordshire; of Bromesgrove in Worceshire; Bolsover Castle in Derbyshire; Owardbek and Mannesfeld in Nottinghamshire; Blunham in Bedforshire; Nailstone and Burbage in Leicestershire; and, Fillongley in Warwickshire.﻿﻿
﻿﻿
Henry was a minor at the time of his father’s death in 1250, the King granting his estates in wardship to Geoffrey de Lusingan who in turn granted it to William de Cantelupe the following year. The nature of the young Baron Hasting’s relationship to Geoffrey (if any) can only be guessed but it is easy to imagine a spirited 15 year old straining against control of this ‘foreign’ dominus. It is similarly easy to see how young Henry was to fit so neatly into the Montfortian movement against foreign usurpation of royal offices: just another young baron whose birth right and inheritance was traded between the over-mighty familia regis.

Between 1251 and 1256, whilst under the wardship of William de Cantelupe, Henry married William’s daughter Joan (born 1240, five years his junior). Clearly the young Hastings was well within the Cantelupe influence. Whilst it is tempting to speculate as to the freedom of choice young Henry had in selecting his bride, the ongoing fruit from the union seemingly indicates a successful marriage. First daughtered with Audra in 1260, then the heir John in 1262.


Young Henry and his two sisters were tutored by Walter de Centilupe, Bishop of Worcester: a political ‘reformer’, one of the three key philosophical mentors of Simon de Montfort and effectively the future baronial ‘army chaplain (Maddicott, Simon de Montfort, p81). Henry came into his inheritance 10 May 1256, formally giving his homage to King Henry III – one can imagine this homage could not have been meant unconditionally in the mind of Henry de Hastings. 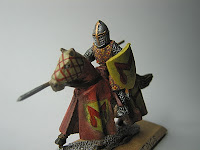 On 8 September 1260 he received a summons to Shrewsbury to be in arms for the Welsh war. At the parliament of May 1262 he supported Simon de Montfort in his complaint of the non-observance of the Provisions of Oxford. In siding with the barons he was amongst those excommunicated by Archbishop Boniface in 1263 and he signed the instrument which bound the barons to abide by the award of Louis IX on 13 December 1263.


When open hostilities broke out, Henry was in the thick of it from the outset. He has been described by the chronicler Wykes as proud, violent and a constant rebel as we shall see. Rebellion was not unknown in the family, his grandfather William having also rebelled against the crown in the reign of King John, their lands being forfeit for a time. Henry de Hastings joined with Gilbert de Clare in 1264 and his army for the siege of Rochester Castle – the siege being lifted with the movement of the royal army through Kent. From there the rebels withdrew to London (de Hasting with them) where they regrouped and marched on Lewes. 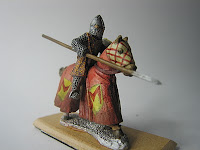 Knighted by Simon de Montfort either in London previously (4 May) or the morning before the battle, Henry took the field in the Left Ward at Lewes (aged 29). He was swept away with the ensuing rout but survived. During the Montfortian ascendancy, Hastings was summonsed to parliament and was installed Constable of Scarborough and Winchester castles.


He took part in the subsequent Evesham campaign, fighting at Simon de Montfort’s side. Unlike the Earl, Henry survived, but was wounded and taken prisoner. He ‘obtained his release’ only to join Robert Ferrers Earl of Derby at Chesterfield in May 1266 where the rebellion enjoyed a resurgence. It seems here that Henry de Hastings’ run of luck continued. Joined by a force under John d’Ayville, Ferrers’ army was engaged at Chesterfield by a royalist army under Prince Edward and defeated but our Henry apparently avoided being captured with Ferrers. There is some suggestion he was out hunting at the time and that the military encounter at Chesterfield was more of an ambush or surprise attack, rather than a set piece battle. 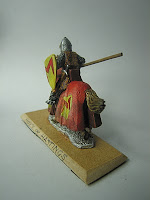 Henry proceeded to Kenilworth castle, and ravaged the surrounding countryside in company with John de la Ware and the surviving rebels. He held out with the rest of the garrison for four months. In that time he is cited as having conducted numerous sorties to harass the besiegers, engaged his own stone throwers and even maimed a royal messenger seeking terms of the garrison. It is here that perhaps we get a glimpse of the regard in which this rebel was held by the royal party as Hastings was especially excepted from the Dictum de Kenilworth, supposedly due to his stubborn resistance. During his custody at this time the King was not without mercy; however, and granted much of his estate to his wife for the maintenance of herself and the children. It is perhaps also worth remembering that it was not only the men within the baronage of England who enjoyed social connection and political influence, Joan being of considerable standing.


The King relented supposedly upon supplication by a conciliatory Prince Edward and Hastings was alternatively sentenced to pay a fine of seven years value of his estates for his release which (presumably) he agreed to. Yet again; however, Henry de Hastings broke faith with the King and joined immediately with the last group in rebellion, the so called ‘disinherited’ who rallied at the Isle of Ely, Henry becoming their leader. Pressing hard to extinguish the last vestiges of revolt, Prince Edward closed in a deliberate military campaign of this outpost eventually forcing the garrison’s surrender in July 1267. Henry de Hastings died the following year, aged 32. 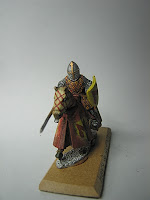 The circumstances of his death are not known, nor whether he was in custody at the time. It seems hard to credit that with his track record of constant rebellion and his leadership of the ‘disinherited’ that he would have been so quickly released by the royalists who had so ruthlessly ended the Monfortians at Evesham. No record of execution exists to my knowledge and whilst murder is not beyond the realm of possibility by this stage in the baronial revolt we need to consider the harsh conditions of any protracted siege and Henry had gone from one to another in rapid succession. It seems disease might very well have been his executioner.


Henry de Hastings was buried at the Church of the Friars Minor, Coventry. He was survived by his wife Joan (died 1271 and interred alongside Henry) his son and heir John (aged five), Edmund and three daughters.


Modelling: Another Gripping Beast miniature, my Henry de Hastings has a non-heraldic surcoat with floral pattern but his device is repeated on the horse caparison in detail. I wash out my colours (using Humbrol enamels) when painting cloth but detail the shield blazon with the bolder colours. I opted for a pattern on the head covering on this occasion, seen in seals of the period. I will most probably not attach a pennon in the future, leaving those for leader figures or unit standards.
Posted by Unlucky General at 1:13 AM