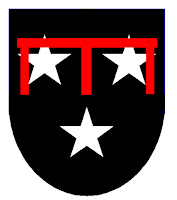 Thomas Pelvesdon (aka Puleston, Pilston or Pyvelesdon) was the son of Roger Pelvesdon of Newport, Shropshire. Roger is recorded as having the arms sable, three mullets argent and I have ascribed these arms to his son Thomas at Lewes but will difference them in that it seems likely that Thomas was a second or other son. A Roger Pelvesdon dedicated The Butter Cross (also The Puleston Cross) which still stands in the Newport high street (a protected monument) to the memory of his father, Roger who died in 1272. It appears both Rogers were Sheriffs of the county and I surmise that Roger was the eldest son, having taken his father's name, manor and office. 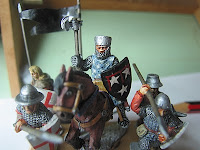 From an analysis of my Foster's Dictionary of Heraldry, the convention for the colour of labels on arms whose colours are black and white is red. Thusly, my Thomas of Pelvesdon will be sporting sable, three mullets argent a label (3) gules.

The younger Thomas is recorded as having married Helen, niece to Michael Tovey who was formerly a mayor of London from 1244 to 1248. By 1263, Thomas was made a Royal Justice and in 1264 he took the field with Simon de Montfort at Lewes with the London foot of the Rebel left ward under the command of Nicholas de Segrave. 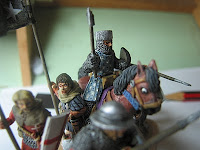 The stakes were high and whilst Thomas survived Lewes (with his father-in-law Michael) it is unknown whether they rallied once more at Evesham. Following the fall of the Rebels and Simon de Montfort's death both were imprisoned and we know that Thomas was released in 1276. If we assume his incarceration commenced in 1265/6, we can only guess at the circumstances and conditions of his decade long captivity. Well into the reign of Edward Thomas is freed, perhaps a broken man and most likely chronically ill as he died the following year in 1277.

The pieces of personal stories of the men who fought at Lewes which can be brought together remind me of the personal and dramatic nature of this clash of arms. Emotions ran high and the risks taken by the combatants and their families were not just confined to the events of the day. There was much to gain but perhaps much more to lose as those at the centre of events were compelled to chose between competing allegiances; especially those who drew arms against their King. 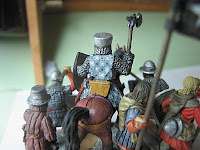 To remember and recognise this man, I am depicting Thomas in a lesser fashion, more in keeping with a squire, mounted on a destrier without caparison, dressed wearing a flat topped helm and set back from the command group amongst the ranks, marshalling his London milita forward.
Posted by Unlucky General at 6:07 PM