Nicholas’ father (Gilbert) died in prison at Pons, Saintonge in 1254 but according to the Dunstable Annals, custody of his estates were granted Prince Edward. Attaining his twentieth year by the Oxford Parliament, this disenfranchised Leicestershire land-holder had good casue in advocating the Provisions which limited the King's authority: he had personal interests aligning himself with the elder Simon de Montfort more other than just falling within the Earl’s socio-political orbit. He was at the parliament in 1262, when the King told the barons that he had obtained absolution from his oath to observe the Provisions of Oxford. How disempowered and frustrated must he have felt?

Whilst summoned to attend the King at Worcester (1 August 1263) and knighted prior to the Welsh campaign, Nicholas’ disaffection with arbitrary royal rule must have peaked when Henry III announced his absolution from his oath to observe the limitations in Provisions of Oxford. On 13 December 1263 Nicholas agreed to arbitration of the baronial dispute with the King’s brother-in-law (Louis IX of France), the would-be rebels last hope of avoiding open warfare being dashed with Louis’ denouncement of the barons.

Nicholas de Segrave had been involved in dispoiling the estates of the Savoyard Bishop of Hereford, Peter of Aigueblanche (family to the Queen) for which he was excommunicated. Now in open rebellion, de Segrave was a pinciple defender of Northampton which fell to royal arms but the young baron managed to evade capture, escaping to the rebellious city of London. He had taken the field immediately following, joining in the siege of the massive keep at Rochester, the siege being broken when the King army’s arrived in the vicinity. Made captain of the London foot contingent through popular acclamation, Nicholas took the field at Lewes within the left ward under over-all command of Geoffrey de Lucy, Earl of Oxford. Nicholas was 26 years years old.

He had previously married Matilda de Lacy, daughter of Walter de Lacy and Margaret de Braose and at the time of Lewes she had delivered three of their five surviving children: eight year old John (son and heir born 1256); four year old Henry (later a knight born 1260); and their two year old Stephen (born 1262). In the shadow of ongoing political disappointments, with extensive lands and rights to recover, together with a growing family, this largely disinherited and excommunicate young knight Nicholas had much to gain from a victory of arms.

Following Lewes, de Segrave served the Montfortian parliament of January 1265, only take the field once more at the disaster of Evesham in August that year. Nicholas was wounded, taken captive and his disinheritance complete with the entailment of all his lands to Prince Edmund. Presumably obtaining release, he fled to the isle of Ely (Cambridgeshire) and took up with the “Disinherited’ rebels to continue the fight. Together with remains of the younger Simon de Montfort’s army under siege at Kennilworth castle, Nicholas de Segrave must have felt increasingly isolated and fearful for the future.

By 13 December Kennilworth was starved into submission but just when matters appeared at their worst, Gilbert de Clare, Earl of Gloucester declared aganst the King, occupying London which once more chose to defy royal authority. Perhaps encouraged to rekindle the baronial cause or merely to escape the futility of any stand at Ely, Nicholas de Segrave made a dash for Southark (London) in company with the then leading rebel figure, John d’Eyville. The record is vague on what transpired next but we do know that together with de Clare, d’Eyville stood down and agreed to the ‘Dictum of Kennilworth’ - a fee (fine) paid to the crown for restored lands and fealty.

By this time the de Montforts were either dead or absent from England, the unity of the rebels had long since been undermined even before Evesham with many lesser affected barons having been accepted into the royal fold. The prospects for a power shift were deperately remote. Ely was remote and had a skeleton garrison; Kennilworth had fallen and his fellow leading rebels knew a good deal when they were presented with one. What choice for Nicholas de Segrave but to follow?

There is some suggestion that Nicholas returned to Ely when London capitulated and was present at the fall of the Ely garrison. There appears at this time charges of betrayal of those left in Ely by either Nicholas or his mother; remarried since 1254 to Roger de Somery, an erstwhile royalist and present at Lewes for the King. Whatever the truth, Nicholas de Segrave had put his rebellious past behind him and had become a future King’s man of Edward, accompanying him on crusade just prior to his accession to the throne in 1272.

Nicholas de Segrave remained a prominent military and political figure in the service of Edward I. When Edward became King in 1272 at the age of 33, Nicholas was 34. Edward was a very different king to his father and headed what Nicholas no doubt felt was a very diffent regime belonging to his generation. He fought the Welsh in two campaigns for his king, championed the King's business in Scotland under his protection, representing as one of the judges of the great suit for the Scottish succession, and remained at court until the very end of his life, attesting charters so late as 25 November 1294 just one year before his death in November 1295 at the age of 57.

In addition to his three sons, by 1264 Nicholas and Matilda had a furhter two surviving children: Eleanor (born 1270); and, Nicholas (born 1274). Notwithstanding the prevalence of infant mortality at this time, the eight years between their third child (Stephen) and fourth (Eleanor), when measured against the fecundity of the couple is suggestive of an estrangement in light of political events between 1262 and 1270. In spite of their trials, Nicholas and Matilda present as a success story. Their son John inherited and retained the baronage until his death by disease at 69 years of age in 1325 whilst on campaign in Gascony. Young Nicholas was a renown knight, first summoned to parliament in 1295; he fought at Falkirk and at the siege of Sterling and died in 1321 aged 47. Eleanor died in 1314 aged 44.

Arms: There is significant discussion within Sir Nicholas Harris Nicolas' The Siege of Carlaverock (see Google Books) on the transition between the traditional arms of de Segrave of sable, three garbs argent banded gules to the later sable, lion rampant argent, crowned or. The change certainly appears to have been made by Nicholas de Segrave at some time and to signify a significant shift in either events or fortunes of the family. For this reason I am opting for an event after the battle of Lewes - either to signify his ascendancy over the royal leopards (lions) or even his future affiliation with them. In any event, it seems that the more humble, even 'common man' associations with garbs or sheafs of wheat are somehow in keeping with a Leicestershire baron marshalling popular support against a tyranical king in the days of his youth. So that is what my Nicholas de Segrave with carry into the field. 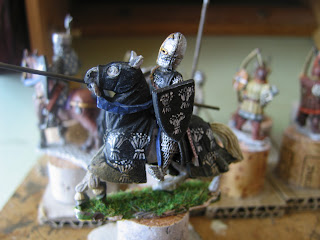 Posted by Unlucky General at 9:41 PM