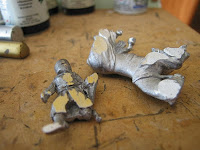 I have long used casualty markers for my units to remind me of who needs to undertake morale tests or even the status of a units psychology - routing and panic etc. Thus far, there is not much available (in fact nothing) for the mid-thirteenth century wargamer and there is rarely ever much on offer for mounted units. I was thus compelled to design my own. I had discussed with my club mate Matt the idea of developing original models from green stuff for moulding - this may still be a future option. In the end and for the time being I have plenty of spare figures which will serve. The example this time are two Essex Miniatures knights and caprisoned mounts - one of which has an old paint job. 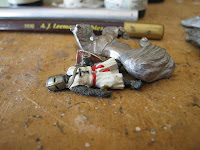 I chose these figures because Essex Miniatures are particularly malleable - most important for the horses. I removed the horses from their bases with stright nosed cutters, filed the hooves back and then twisted the legs, central torso and necks to achieve different poses - one dying and one attempting to recover from a fall. As you can see, some flat filing is done to make the figures rest flatter and a foot or two were removed for best positioning of the unconscious and dead knights. I chose to base them on balsa to press the models down further. 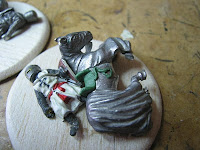 The vacated saddles needed to be sculpted from green stuff (as you can see) remembering to include the stirrups and the leathers. I decided that the dead mount was as a result of archery and a lance wound to the chest so drilled a larger hole for the latter and two smaller holes for arrow shafts in the unfortunate beast's neck. The arrows were a complete experiment which appears to be working for me. The shafts are of hard straw taken from a yard broom, cut, split  and shaved thinner. I thinned the ends further and flatter. I had intended to slot thin card into a cut groove for the feathers but that overly bulged the shaft and I couldn't control the split. Styrene rods may be an option which I shall try another time. 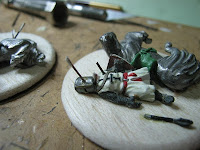 I ended up making the feathers in two sections - appearing to protrude either side of the shaft. I made the feathers from Evergreen .040" sheet styrene and glued them with Humbrol Poly Cement. I glued them into the hand drilled holes with Selley's Kwik Grip. I'll run a matt cote varnish over the arrows befoer undercoating the models.
Posted by Unlucky General at 3:20 AM