Well I've chipped away at this terrain project for more time than I care to reflect on but thanks to some school holiday leave with my daring daughters, I got 'some' downtime and put the finishing touches to the marshland for my Lewes table-top. This first shot was an indulgent one but just goes to show how realistic natural light in all its forms can render a model at the right time. 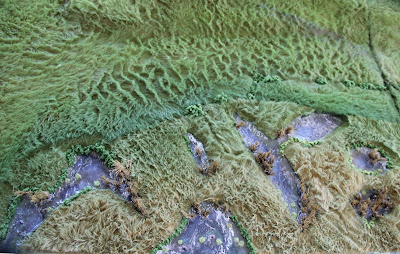 The next shot is the completely finished marshland. As you might make out, I edged some of my bogs with foam foliage and put a few dots of static grass at the extreme shallows. I'm not happy with the acrylic lacquer but am satisfied they look wet enough - less pools and more wet mud. This feature of the ground has in fact caused far more effort on my part than it may ever justify but if we play the game enough times, some units are bound to get driven into it.

Here's what the Royalists will be looking at as they form up to advance up the slope of the Downs - rather them than me. Excuse my head shadow - nothing to be done I'm afraid. The white patch to the right is where the edge of the town will feature - at this time I'm thinking two modest houses, a yard or two and a cabbage patch.

And finally, the complete vista looking from Lewes over the Downs. Essentially, it's game ready now but I'll edge the boards with white and I have to construct some scratch-built buildings - the first of which will be the windmill. Then I can get on with painting the other half of my rebel army. Anyone who follows my generic wargame blog 'Unlucky General' will know I have already started on my next terrain project for Waterloo:Papelotte which will also feature six 900x900 millimeter boards and synthetic fur. But for today, I'm painting Charlotte's bedroom.
Posted by Unlucky General at 8:43 PM 5 comments: 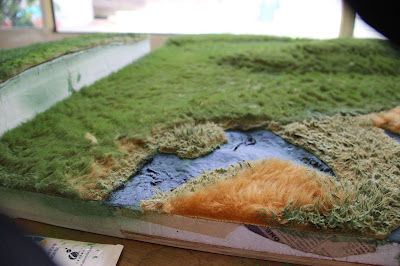 Back to my boards after a frustrating absence and a brief stint in the Pacific. I re-read over my previous posting and there have been a few 'u-turns' in my approach to these marshes. You may see the results of my attempts at brushing colour into the synthetic fur. Not at all what I had in mind but it left the terrain with that sodden, well-trodden look like a wet cow paddock. I'm actually happy with the results where I had them but ended up returning to the spray gun to colour the remainder. 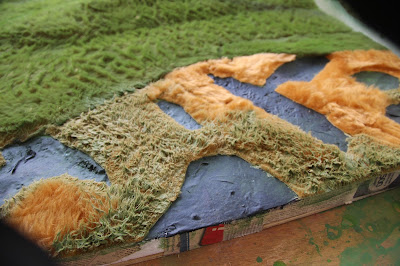 The reeds have been sewn into the pools by cutting crosses into the paper and foam beneath and pushing the ends through blobs of Selley's Liquid Nails. The reeds are taken from picking apart a brown fiber door mat. I just love this stuff for clumped grass, crops and reeds. Once unraveled, the fibers are bunched and double over and can be either glued as a double-clump or adjusted to an alternate length. Once glued, they paint up easily and so I gave them an uneven dark green coating. After the glue set, I painted the pools various mixed greens, browns and black working for a colour-depth effect at the lower points. 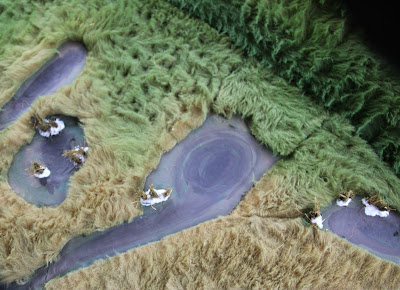 I read up and looked at a few water effect lessons on YouTube (what a great how-to tool site it is) but in the end I opted for applying several coats of varnish. I find that water effects and epoxy resins are all very well and good but I'll achieve the same result for my terrain pieces with what I had to hand - and for considerably less cost. I might say here, there's a conscious limit to how far I am going to go with this terrain. This is meant to be a practical wargaming table-top and not a static display diorama or model railway layout. Even though I want this to be the best I can make it, there are limits. After what I hope is an initial WOW moment, anyone seeing it will move on to the miniature battle which rages across it - not stand about adoring it.
Once the paint had dried overnight, I fixed the clumped and painted reeds with a good squirt of white wood glue. Then it will be the first of three resin coats minimum. I will fixed spots of static grass in the shallows and potential crossing points. Fixing clump foliage at the pool edges will complete the pools themselves and then I moved onto fixing bushes and shrubs about the landscape to break up the pastureland. 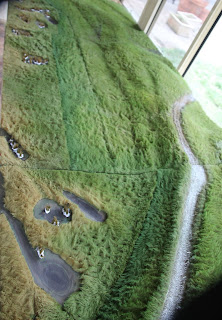 I puzzled over the clear line left between the main boards and the synthetic fur I added later for the marsh edges. Whilst I have fixed some shrubs along that line, I was going to break it up with extensive foliage to better merge the marsh with the grassland but I have decided to leave it. The obvious line will now clearly mark the edge of the marshy ground as a wargamer's aid; a sacrifice of aesthetics for practicality.

What I am happy with so far is the blend of green into faded grasses as the marsh land creeps toward the river Ouse. This may not in fact be correct - perhaps the grasses and scrub would be greener but I enjoy the effect and it helps marking out the bad ground. The fur-lines will be somewhat softened with some bushes and gluing them where there has been some lift. 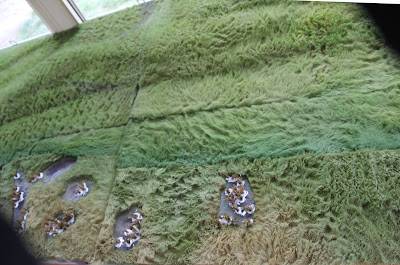