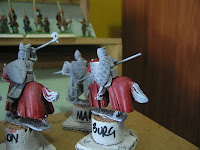 In fact, in the first shot it's one of my fighting Bishops with John de Burgh of the Rebel Right Ward heavy horse. If you've looked at the evolving army list (currently Version 2) you will be aware that I have ten knights attached to the Right Ward whom I have begun to paint. John de Burgh's arms are particularly complex and took two attempts to scetch out the red checkers pattern between which will be further detail. The bishop is simply being painted at the same time and I will feature him in another posting. These figures are all Gripping Beast for which I have a few comments. 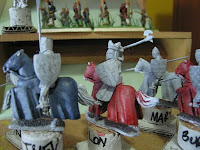 They are some of the best looking and proportioned figures money can buy and I particularly love these knights. They are; however, the worst models to construct primarily due to the poor hand detailing. Caste in an open grip to receive weapons, they are not deep enough and the alloy too rigid for ease of manipulation. It took some persistent cutting and careful filing to make a suitable receiving fit for my home made steel wire lances - the bendy ones accompanying the figures are of no use. With the couched lances particularly, I filed groove the length of the forearm to make an extensive joint for gluing (Araldite) the lance in place. Where possibe I glure the forward shaft the the horses head to provide the second join which achieve with up right lances by fixing the butt of the lance in a hole I drill in the weapon hand foot. At the time of gluing I pinch the hand closed over the lance with needle-nose pliers. 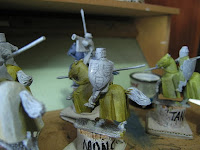 Some of my caprisons will be of an undied fabric to reduce the tendency for heraldic units appearing too gaudy. The caprison colours are muted compared to how the knights' arms will be depicted on their shield. I dilute the base colours (Humbrol with mineral terpentine) with a little black, using slightly more for the creases. Applied over white undercoat (not prayed but brushed) gives me graduated depth and a fabric look. If I remember, the unit leader with have the only coloured helm. This is my first unit but am remodelling an old unit of levy archers (12) a the same time whilst I await the arrival of the rest of my Right ward infantry figures. 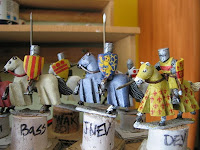 The following shots are the knights at their pre-matt spray coat stage. All matt painting is done including some staining at the edges of the caprisons prior to the protective and matt coat being applied to seal the paint job to protect the models. I will then apply the finishing touches which are generally the shiny or gloss metalic coats such as brass, gold and some polish on the steel which is diluted and dry brushed silver - dry brushed very sparingly. The silver will pick up lance point edges and difference the polished steel helmets from the duller mail which I will leave as is. For this unit I have not opted for overly elaborate caprisons. I thought to represent a subtle difference between my horse units from Simon de Montfort's bodyguard unit who will have highly decorative caprisons and individual foot figures for every mounted knight on the off chance there is some need to hold out somewhere. 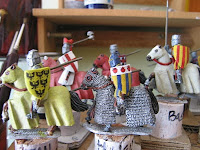 Posted by Unlucky General at 1:05 AM