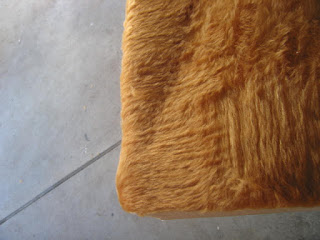 I don't know what came over me this past weekend but I found my terrain building Mojo and just got stuck in. Having glued the synthetic fur to the polystyrene, I needed to trim the material back flush with the edges. As you can see, I brushed the fur into the centre of the boards before trimming to ensure the fur length right up to the edges - I deemed this especially important for internal edges. Once that was done, there was no reason to put off giving the terrain it's hair-cut.

I trimmed those areas of intense habitation or use right down to the base - that being the rise where the furthest extent of Lewes township appears and the site of the windmill. I began by using a Breville brand electric hair clippers but after some time realised that the hair care scissors which came with the kit was far quicker and more effective at getting straight to the base. I finished off with the clippers though.
The pathways were done similarly and then a blended trim was given to the fur either side to blend it into the fur line. I figures that some haphazard grazing might always occur along pathways in my period. I eased off on how closely I trimmed back the path as it neared the top of the ridge line, assuming the traffic to be heaviest nearest the town and certain from the mill to the town. There will be more stubble about the upper pathway than will be evident toward the bottom of my table-top.

Once the paths were cleared, I looked to trim back those areas most likely to be grazed upon the most. Lewes today still has sheep on it and of course the grassland or pasture needed to be trimmed back accordingly. I selected an extent which reached from the Lewes base line up to the path and contours ending at the windmill level. I took the pasture across the intersection with the upland pathway up to the natural rise which forms the spur running down toward the right side of the town. I ceased trimming on the rise of that spur as the other side is where the marshland commences and my terrain will reflect the habit of Lewes cow-herds corralling their beasts away from the dangerous bogs and sink holes over the other side of the spur line.
Also, to be honest, trimming pasture land is hell on the scissor fingers and a little dull. I may represent some strip farming to the right of the town buildings but have as yet to decide. I don't want this turning into an impractical model - it needs to be a functional wargaming space. I cropped the pasture land by snipping in toward the base of the fur at about a 45 degree angle at about one inch intervals (very approximate) along a series of horizontal, then vertical axes. Apart from dropping the height and bulk of the fur, it presents as a tufted surface which is reminiscent of cattle grazing good pasture - those beasts being selective and going for greener, new growth shoots around the older, taller and less nourishing grasses. Am I thinking this through too much? Anyway, there are plenty of examples of this within the rural surrounds of Canberra which relies on unimproved grassland rather than the cultivated, fertilised and intensively farmed pastures of much of modern England.
Trimming the fur is a messy business and to keep things under control I used our dog hair brush. I could be as vigorous as I liked and the flexible wired side picked up all the loose fure very well indeed.

Now all I have to do is find all those photos I took of Lewes Downs to get my colour schemes before the next step - the spraying.
Posted by Unlucky General at 11:58 PM

fantastic mate really taking shape.....looking forward to playing on it!