Heraldry: Gules, three lions passant in pale argent.﻿
﻿
﻿John Giffard of Brimpsfield (sometime recorded Brimsfield), Gloucestershire was born 19 January 1231, Brimpsfield Gloucestershire (probably Brimpsfield castle). The Giffards came to England and conquered with the future William I. John inherited Brimpsfield, Cranham manor (with the Giffards from the time of Hastings), Stoke Giffard, Rockhampton and land in Oldbury. He was hereditory patron to the Benedictine Priory in Brimpsfield (an alien house from Fontenay) and the attached parish church.


﻿﻿John's Father, Helias, had previously rebelled against King John, had been imprisoned, excommunicated and his lands confiscated for his troubles. In swearing allegiance to the young King Henry following John's death in 1216, the family estates were reinstated. Helias died in 1248-9: John inherited at the age of 17-18 years.
Brimpsfield castle is presumed to have been built early in the Norman occupation on a previous Saxon site, having by John's time one 'massive central tower' at the centre and four smaller ones at the corners: only the ditch survives today.
﻿


John is described as, 'a soldier of great courage and no less integrity' (William Rishanger, Opus Chronicorum). He was an active 'military knight', taking up arms for the Welsh expeditions of 1246, 1247 and 1248, being recognised and awarded governorship of St. Briavel's Castle and made Warden of the Forest of Dean to hold against the Welsh.
﻿

﻿John Giffard joined with Simon de Monfort early in 1263 in his campaign against the King's indulgence toward 'foreign' family and their occupation of royal offices. With Roger de Clifford, he besieged Gloucester Castle, held by the French knight, King's man and Sheriff of Gloucestershire, Maci de Basile. The Sheriff had a Montfortian competitor for the post, the local Gloucestershire knight William Traci, whom Giffard was a local backer. Politics by now had begun to turn to violence and spill over into the streets. Whilst holding his rival council, the baronial Traci was set upon by Basile and his men, beaten and bundled off to Basile's castle under arrest - Clifford and Giffard were having none of it. They stormed and took the castle, dragged Basile into the Welsh marshes and raided his estate at Sherston, seizing his livestock and driving them back to Brimpsfield.


Unfortunately for Giffard, his former compatriot Roger de Clifford changed sides, returned to the King's favour and handed over Gloucester Castle. Soon after, the newly installed Royal Constable of the castle held a hundred court at Quedgeley and summonsed Giffard as a rebel to answer charges. John attended but in arms and in strength, killing a few at court and dispersing the rest. Giffard followed hard on, attending Gloucester by 1262/3 with the strength of the de Montforts behind him. With his confederate, John de Balun, Giffard disguised himself as a Welsh wool merchant, deceiving the city guard who, allowing the two knights to close with the city gate were surprised when the two threw back their robes and overwhelmed the guard, allowing Simon de Montfort, his son Henry and their party inside to take the city. Whilst the city was now in rebel hands; however, the castle was not.
﻿
﻿Prince Edward and his forces arrived to take the city and relieve the castle but was repulsed at the city walls by the rebels. He then succeeded in sailing across the Severn direct to the castle to reinforce the garrison. A siege ensued and we are told it was hotly contested until a truce was brokered by the Bishop of Worcester and Abbot of Gloucester whereby the rebels (Giffard amongst them) withdrew.


We next hear of John Giffard (at 33 years) as one of the leaders attributed with heading the London left wing on the field at Lewes (I have given him command of the Left Ward horse). He is conspicuous in the record as having fallen before the royalist cavalry assault. He was taken prisoner and led back to Lewes Castle only to be released later when the day was won by de Montfort. He must not have credited his good fortune. 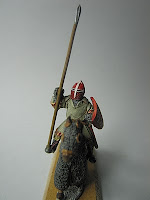 After Lewes; however, John Giffard broke with Simon de Montfort and the baronial cause after a dispute over ransoms for Richard of Cornwall (Kings brother and King of the Romans) and the other prisoners captured at Lewes. It was in this period of Simon de Montfort's supremacy that he lost much of his support in spite of his incredible success. It would seem that power sharing was not the Earl's strong suit. Whatever the faults or particulars of the dispute, Giffard left with Gilbert de Clare, Earl of Gloucester, joining with the King - or one should say the King's party as Henry III, his son Prince Edward and several other leading royalists were at that time prisoners of the Montfortians. Given the way the winds of fortune had blown up to that time, their defection must have been heart felt to have deserted Simon de Montfort and the rebels when their power was at it's zenith.


Whilst 'touring' at Gloucester with his imprisoned monarch, Simon de Montfort was blocked by the forces of Giffard and de Clare who, through manouvre and strength of numbers had compelled his withdrawal. When back at Hereford, Prince Edward escaped de Montfort's custody and he joined with Giffard and de Clare. Together, they took Gloucester and destroyed all available shipping to deny Simon de Montfort capacity to cross the Severn. This he did; however, downstream of Worcester and soon after was intercepted at Evesham where he and his cause were put to a bloody end (1265). 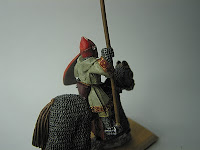 Having been held in security for his allegiance, Brimpsfield Castle was once more restored to John after Evesham and he was pardoned for his rebellion. Whilst Giffard's war record was dramatic and uncertain, so too was his personal life. A bachelor it seems until 39, John Giffard finally married. The lucky lady was the widow Maud Longespee who had been allegedly abducted by Giffard, spiriting her to his Brimpsfield Castle and agreeing to pay the King a fine of 300 marks for marrying without consent in 1270. John seemed to have no luck with wives, but more than they, as Maud died (survived by her daughters Catherine and Eleanor), who was followed by his marriage to Alice Maltravers and finally Margaret Neville (another widow) in 1285. By then John was aged 54 but finally fathered his son and heir, another John Giffard, and a spare (second son) Edmund.


John went on after the Baron's War to take part in the Welsh expedition against Llewellyn (1282) and he was summonsed to parliaments between 1295 to 1298. He died (it is said peacefully) 29 May 1299 (aged 68) in Boynton, Wiltshire and was buried in the Abbey Church at Malmesbury. By the time his son inherited his father's estates, they had expanded significantly since the time of Helias. The Giffards had come to possess holdings in Gloucestershire, Sherrington and Elston (in Wiltshire); the castles of Cortham, Clifford and  Iskennan with lands in Carmarthen; Llandovery Castle (of the King); and, Badgeworth manor and Burford town (of the Earl of Hereford). Not bad for the man who fell at Lewes!


Modelling: As one of history's identified leaders of the London Left Ward, I have made John my cavalry commander and as such I have given him one of my maille barded horses and a painted great helm to help him stand out from the otherwise highly heraldic masses. He is a Gripping Beast model and I have given him some heavily embroidered cuffs and hem to raise the standard a little. I am also going through a phase at the moment of putting some extra attention to the surcoats, going for motifs other than repeating the blazon heraldry. To be honest, given his three lions, it was also another reason not to go for a cloth caparison - I was damned if I was going to paint 15 lions.


Last of the Brimpsfield Giffards and the Rising of 1321-2: RF Butler (1957)from the Transactions (Vol 76) of the Bristol and Gloucester Archeological Society.


Brimpsfield Castle and it's Owners: W Bazely (1895-7) from the Transactions (Vol 20) of the Bristol and Gloucester Archeological Society.

Posted by Unlucky General at 12:35 AM

Another Knight with a interesting background, you really are raising the bar Greg when it comes to research!

Btw you beat me by 20 mins for your post, mine is up now also!

This page (http://battleoflewes.blogspot.com/2011/02/john-giffard.html) is very informative, so thank you! There is one point that you might like to check: The Complete Peerage says that Alice Maltravers was John Giffard's mother, not his wife!
Regards